Donald Trump is taking unproven coronavirus treatment hydroxychloroquine as as a preventative against the virus, according to Donald Trump.

The president, in addition to floating bleach injections and blasting UV light into the body as other dubious possibilities for SARs-CoV-2 treatment, has flouted scientific caution and repeatedly declared hydroxychloroquine a possible “miracle” drug. He has also either been taking it or is merely lying that he is to cover his ass. On Monday, Trump told reporters, “I’m taking it, hydroxychloroquine, right now, yeah. Couple of weeks ago, I started taking it. Because I think it’s good, I hear a lot of good stories. And if it’s not good, I’ll tell you right. I’m not going to get hurt by it.”

“It has been around for 40 years for malaria, for lupus, for other things,” he added. “I take it. Front-line workers take it. A lot of doctors take it. I take it.”

The available evidence does not back either the claim that the drug is “good” or that the president is definitely, for sure, not going to be harmed by taking it. The International Society of Antimicrobial Chemotherapy, whose official journal published a French study that initially claimed to show the antimalarial drug was effective against coronavirus, has since said the paper didn’t meet their standards. While research is ongoing and could still show otherwise, two large-scale studies in New York have found hydroxychloroquine has no significant impact on mortality of patients with covid-19, the disease caused by the virus. This is also the case of recent research in France and China. There is also no data as of yet to show that taking the drug as a preventative, currently the focus of an ongoing studies in Florida and elsewhere, actually works.

But a Department of Veterans Affairs study of older patients showed that the drug may increase the risk of potentially fatal heart problems, a well-known side effect of the treatment. This risk may be higher among older individuals with preexisting heart conditions, which is not exactly good news for this particular president. Both the Food and Drug Administration and the National Institutes of Health have issued advisories urging caution in using the drug to treat the virus. 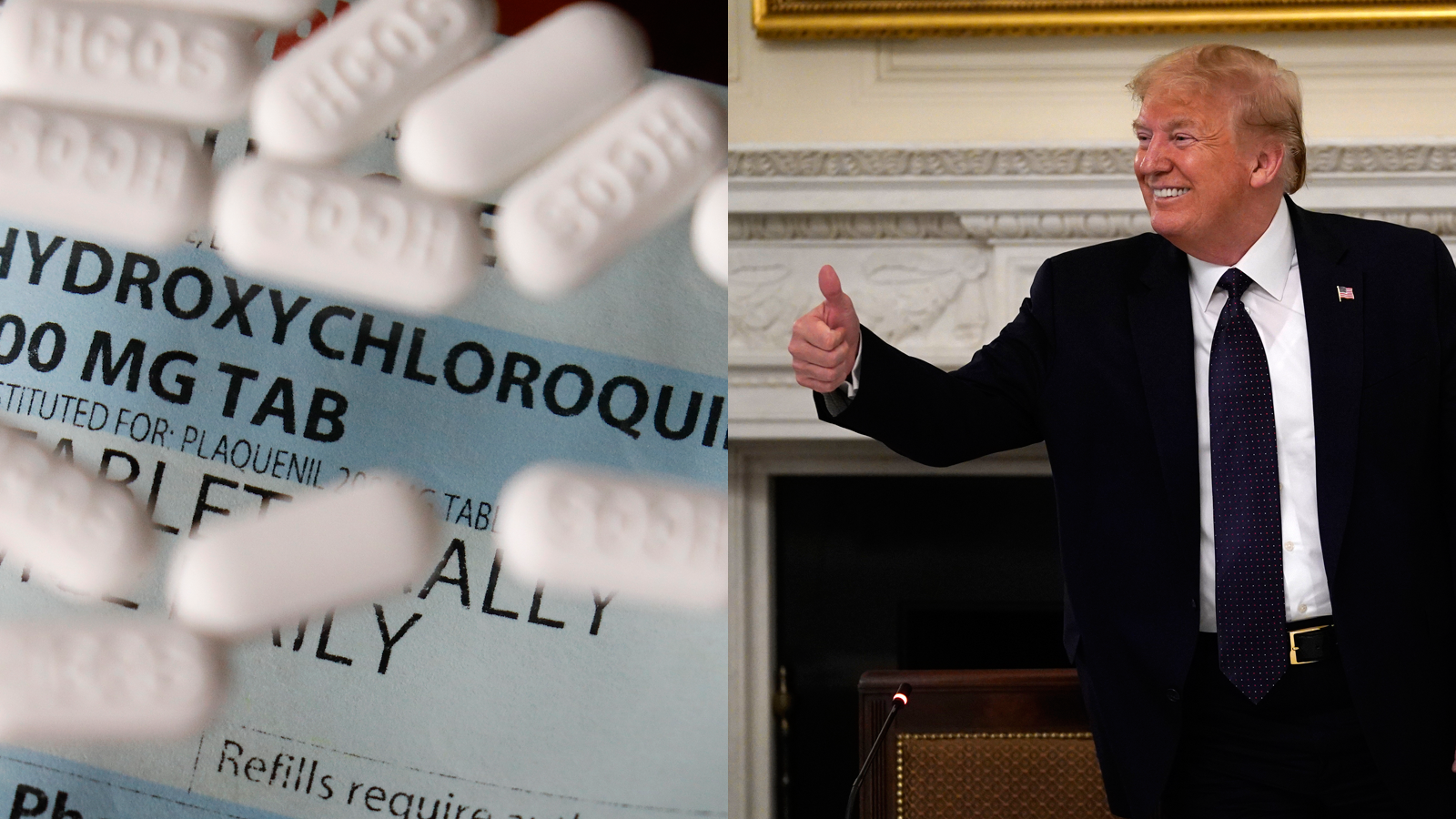 (Trump downplayed the VA study as “very unscientific” and conducted by researchers who “aren’t big Trump fans” on Monday.)

The president is correct that some front-line workers and doctors are taking it. But at least some of those prescriptions were fraudulently written in the wake of the French study, according to ProPublica, and contributed to ongoing shortages of the drug for treatment of lupus and rheumatoid arthritis. In other cases, personnel were part of scientific studies.

“There are no data that pre-exposure prophylaxis is effective to prevent coronavirus,” the University of Minnesota’s Dr. David Boulware, who is conducting another national trial on hydroxychloroquine, told the New York Times. “It may be. It may not be. We do not know. The only way I would recommend taking hydroxychloroquine is within a clinical trial.”

“I certainly would not recommend that people in the U.S. ask their physicians to prescribe hydroxychloroquine for the prevention of Covid,” Vanderbilt Medical Center infectious disease specialist Dr. William Schaffner told the Wall Street Journal. “Its use is entirely speculative.”

Scripps Research Translational Institute director and cardiologist Dr. Eric Topol told the Washington Post such a prescription would be “completely without evidence of any benefit and, on the other hand, known risk of serious heart rhythm problems… All risk, no proven benefit, goes against any rational use of the drug.”

Of course, virtually everything the president has said about the pandemic is one or another flavor of bullshit, so this could easily be another fiction rattling out in the confines of his skull. FDA guidelines only authorize emergency prescriptions of the drug to patients already hospitalized with the virus. In a statement to the Journal, White House physician Dr. Sean Conley said he had discussed the drug with the president on “numerous” occasions, but never actually confirmed he had prescribed it.

“After numerous discussions he and I had regarding the evidence for and against the use of hydroxychloroquine, we concluded the potential benefit from treatment outweighed the relative risks,” Conley wrote, leaving it unclear whether he meant the risks to Trump’s health or his continued employment.

Correction: 5/19/2020: A prior version of this article stated that the publisher of the French study, ISAC, had retracted the French study published in the International Journal of Antimicrobial Agents. ISAC has taken the extraordinary step of stating the society does not believe the research met its standards, and co-publisher Elsevier has said it is investigating on similar grounds; as of May 19, ISAC has not formally retracted the research. We regret the error.