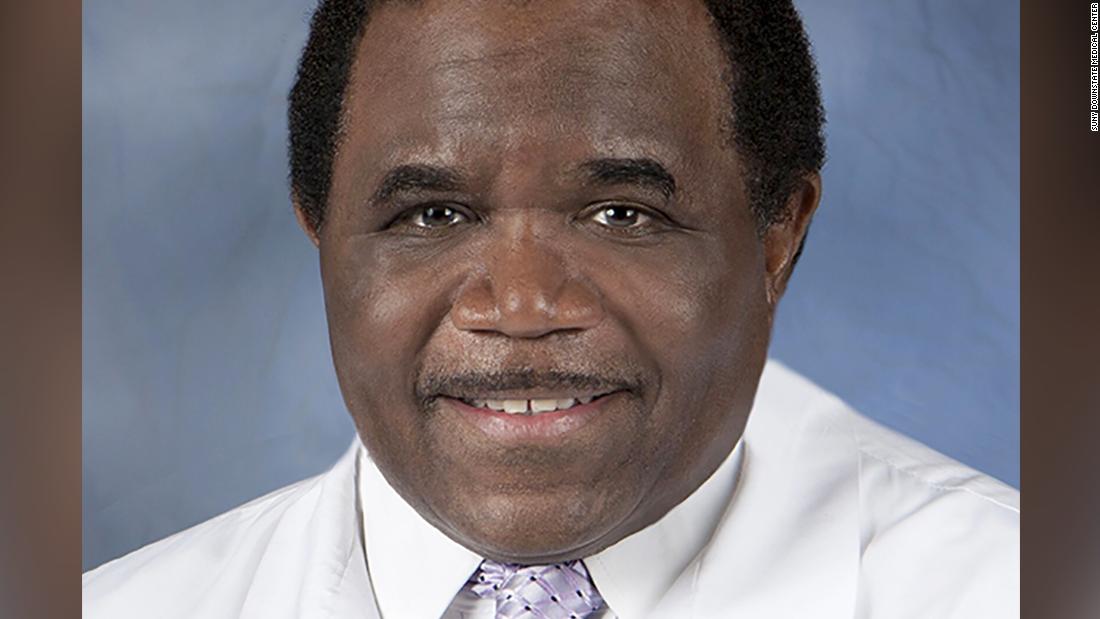 Dr. James “Charlie” Mahoney, a physician in Brooklyn for over 30 years, is another frontline casualty in the global fight against the coronavirus pandemic. But to those who knew him, he lived every day serving others and fought the virus with his endless posi…

(CNN)Dr. James “Charlie” Mahoney, a physician in Brooklyn for over 30 years, is another frontline casualty in the global fight against the coronavirus pandemic. But to those who knew him, he lived every day serving others and fought the virus with his endless positive spirit until he physically couldn’t.

Mahoney devoted his entire career to the University Hospital of Brooklyn, SUNY Downstate, where he began his medical schooling in 1982 and eventually worked as a pulmonary and critical care attending physician until Covid-19 sidelined him.
“He was the first one on the front lines taking the onslaught. He was our backbone,” Dr. Robert Foronjy, the Chief of the Pulmonary and Critical Care Division at SUNY Downstate, told CNN.
“He saw this as his calling,” Foronjy said.
Mahoney, who was 62, could have taken a back seat during the pandemic, given his age and health. But his family and colleagues say he wouldn’t even consider it.
The Centers for Disease Control and Prevention has cautioned that individuals older than 60 and people with serious chronic medical conditions “are at higher risk of getting very sick from this illness.”
Mahoney’s daughter told CNN that she “may have been worried. And I know the rest of our family was also worried, but there was never a question of was he not going to do it.”
“He wasn’t going to step back and he was going to try to help people, and as many people as he could,” Stephanie Mahoney said.
His patients could always reach him. He always gave them his cell phone number.
“He was almost like the mayor walking the halls of Downstate,” Foronjy said.
He even had family on campus. His older brother Dr. Melvin Mahoney is an internal medicine physician at the hospital. They’d often get each other’s hospital pages, his daughter said.
Known best as “Charlie”, Mahoney was also a clinical assistant professor at the academic hospital. He supervised and mentored countless medical students throughout his career.
“Sometimes he did it by giving someone a pat on the back and sometimes when they needed a dressing down, but they were always getting the truth from him and they always knew that he cared,” Foronjy said.

‘My dad was a big story teller’

Vytas Vaitkus, a pulmonary critical care fellow, trained under Mahoney for seven years during his time at SUNY Downstate.
Vaitkus was nervous to present a patient to Mahoney his first year as an intern in 2013, because his excellent reputation preceded him, but Mahoney took care of that quickly.
“Before I started he cut me off and started talking about a story. He made me feel completely at ease right away,” Vaitkus recalled.
Mahoney’s kids agreed.
“My dad was a big story teller,” Stephanie said. “He would always tell these stories and he would be so vibrant and so funny and he would be really truly like a character.”
Mahoney brought that energy to the physically and mentally taxing treatment of critically ill Covid-19 patients at the beginning of the pandemic.
New York City is considered an epicenter of the virus, with more than 191,000 cases since March, according to city data.
All the patients at SUNY Downstate have suffered from Covid-19 — it’s one of three hospitals in the state ordered by Gov. Andrew Cuomo to dedicate itself entirely to dealing with the pandemic in late March. Four patients died of the virus in one hour that CNN visited SUNY Downstate in early April.
“One of those days in the early kind of beginning, he called me and just was like, ‘you know Steph, this has been one of the hardest days I’ve ever had in in medicine,'” his daughter said.

‘My number one guy, my best friend and my hero’

Though he worked day shifts at SUNY Downstate, nights at Kings County Hospital Center and served an outpatient practice, Mahoney’s kids saw him as ubiquitous.
Mahoney has three children, Jamie, 31, Stephanie, 27, and Ryan, 25.
“You would’ve thought he had more hours in the day than anybody,” Stephanie said.
Mahoney managed to coach his kids in several sports as they grew up.
“No matter how hard he worked, how long he was at the hospital, he was always there for me growing up. One day he’d be at Downstate, next night at Kings County and during the day coaching my teams and picking me up. He was always here,” his son, Ryan Mahoney, told CNN.
Just like his dad, his son Ryan played collegiate baseball and is now pursuing a medical degree at Rutgers University.
“He got me through everything I did — my number one guy, my best friend and my hero.”
His daughter, who’s in law school at Howard University, said he’d even talk to her about medicine.
“Even through his stories he was always teaching us things and teaching us how to be,” Stephanie said.
“He would explain a procedure or something like that. And I’d be, like, ‘I mean, I wasn’t calling about this, dad, but sure, you can tell me about that.’ He kind of was unbelievable in that way.”
He was a work-hard, play-hard kind of guy, his kids said.
Mahoney loved to travel and usually with his family. “He loved to cruise,” Stephanie said.
They’d go on family vacations once or twice a year — he and his kids and their extended family since he’s one of five.
He’d play Craps in the casino and teach anyone the game if they’d let him.
They hoped to go on a trip together when the worst of the pandemic passed, according to Stephanie.
“He worked hard but he also liked to enjoy his life. Even when coronavirus hit he was saying, ‘I had to cancel my trip I’m sad about it,'” she said.

‘He was a doctor right up until the end’

Doctors at Downstate were starting to see the number of critically ill patients shrink by the end of April around the time Mahoney caught the virus, Foronjy told CNN. The hospital has since closed several expanded ICU units no longer needed.
“As soon as we thought we were getting over it, this happened,” Vaitkus said.
“It was a gut punch. It sucks your spirit to know you’re trying to do as much as you can for these patients.”
Mahoney checked himself into the emergency department at his own hospital after suffering a week of fever and mild symptoms, according to his family.
“He was a doctor right up until the end,” Foronjy told CNN.
Mahoney was eventually admitted to the ICU and was directing his own medical care up until he was sedated and intubated , according to Foronjy.
“He embodied excellence. The level of skill — that’s a real loss,” Foronjy said.
Unlike thousands of others who died of Covid-19 without loved ones near due to visitor restrictions, Mahoney was surrounded by people who loved him at the hospital in his last days.
His long-time student, Vaitkus, visited Mahoney a few times each day during his final week in the ICU in the hospital they shared for nearly a decade.
“He was so gracious and humble and kind and made you feel warm visiting even when he was critically ill,” he said.
“He was so humble even, the fact that he trained all of us and then he’s an ICU patient and thanked all of us for coming to visit” Vaitkus said.
A small army of SUNY Downstate healthcare workers transferred Mahoney to an NYU Langone Hospital that was planning to treat him with a more sophisticated oxygenation treatment. Just as they settled him into the facility, he succumbed to the virus on April 27 — his own colleagues performing chest compressions.
“I think that spiritually he felt us there. It shows you how much people love him. It shows you how much he meant to the institution,” said Foronjy, who was in the room in those last minutes.
“I couldn’t fathom losing him, and it’s still something that everyone here is still having a difficult time processing. I have literally witnessed a village of people die in the past month or two and on top of that you lose someone who was such a good human being,” Foronjy said.
Foronjy, with the hospital organization, has raised more than $30,000 in a GoFundMe campaign that will sponsor a scholarship for a student of diversity at the medical school, in Mahoney’s memory.
In the weeks since his passing, his kids have been flooded with memories and words of support from friends and strangers who knew their dad, Stephanie told CNN.
“It reminds us how many people cared for our dad and how many lives that he touched. It’s almost overwhelming. I couldn’t be more proud to be his daughter.”