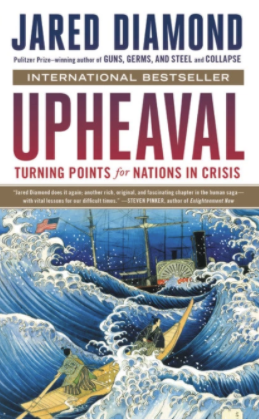 Naturally, the thing that comes up every day, and that people are constantly asking me, is the relation of the world crisis going on now to the personal crises that have been the specialty of my wife, Marie Cohen, a clinical psychologist, and to the national crises that were the subject of my book Upheaval. It turns out in retrospect that it’s not that I had the foresight to see this coming, but it is remarkable how the outcome predictors for personal crises that Marie comes across with her clients, I recognized, have parallels to outcome predictors for national crises, many of which also fit flagrantly the current situation.

For example, all of us know in a personal crisis—breakup of a marriage, death of a loved one, financial setback, health setback, and all these personal crises—getting through it requires, first of all, acknowledging that you are in a crisis. If you don’t do that, you get nowhere. Accepting responsibility for doing something yourself and not blaming others, getting help from other people, or if it’s a country, getting help from other countries, using models of people or countries that have dealt with similar issues. Those are the outcome predictors for personal and national crises that were the subject of my book.

Now we come to COVID. What do we get? First of all, acknowledgement or denial of acknowledgement. China waited a month to acknowledge that something was going on. The US waited a couple of months. Accepting responsibility, as opposed to blaming others. It still is the case that our beloved president blames China and now blames the WHO and blames Fauci, doing everything other than accepting responsibility himself. Getting help? Yeah, there’s some of that going around.

Help from others? Marie just received 700 face masks from China because one of Marie’s nieces is an emergency room physician with lots of colleagues who have been reduced to using a paper face mask, one face mask all day. So, Marie got 700 masks from China. Honest self-appraisal, severely in deficit in some places, notably our president, and initially Boris Johnson, until illness shaped him up. Honest self-appraisal conspicuous from the beginning in Singapore.

What I think is going to turn out to be the most significant, most lasting consequence of this crisis and lasting good consequence is that it will serve as a model for the world dealing with world problems. A basic failure of the world in dealing with world problems like climate change and resource use is that when nations deal with national problems, they should have a national identity about which they can rally.

Finland’s national identity was strengthened by a common enemy, by invasion by the Soviet Union. The United States came together overnight at the time of Pearl Harbor. Britain came together at the time of the Blitz and the Battle of Britain. But the world has not had a world identity. We citizens of the world are not united by a common enemy. And yet we do have common enemies—climate change, resource overuse—but they are not visible enemies that kill people fast.

I can foresee a good outcome, a silver lining to what’s going on now. Now, for the first time the world recognizes we have a common enemy, and it’s clear that all countries have got to deal with this problem, because if 215 countries get rid of COVID and the 216th country still has it, it will infect the rest of the world. This is a world problem that requires a world solution.

I’m cautiously optimistic. Along with bad behavior, there are signs of good behavior, of countries rallying together. Let’s suppose, hopefully, that within this year the world does rally together and conquer COVID, I can see a good outcome is that this will then serve as a model for the world rallying to deal with the other world problems, like climate change, for example.

Countries have been dealing or avoiding dealing with climate change one by one, but it’s a world problem. You can’t reduce carbon dioxide levels just over China. You have to reduce carbon dioxide levels over the whole world. And similarly, overexploitation of resources, overexploitation of forests and fisheries around the world is a world problem.

Worst-case scenario is that countries try to deal one by one. There’s already talk of a race to produce vaccines, where a country that has the vaccine will use the vaccine for itself in order to gain advantage rather than spreading it around the world.

To place that into perspective, yes, the EU has its borders and one might be disappointed at closing the borders, but for heaven sakes, the United States has been around for 142 years, and nevertheless, there are borders closing down between our states.

I don’t see this as something particularly disappointing about the EU. Instead, I see it as a sound, public health policy to close borders, which sometimes coincides with state borders, sometimes with national borders. But in the case of Los Angeles, in case of Sydney, Australia, they are city borders. This is okay. It’s sound public health policy.

Here’s a case where I would invoke national identity. As long as people feel competing interests, they want to get into that elevator and ride the elevator down to the ground floor and prevent anybody else from getting on that elevator. It’s the tension between competition and cooperation. In a crisis, in places like the Nazi concentration camps, there were supporting groups that helped each other through, then there was also competition, stealing food, stealing shoes from other people.

In a crisis, people can go in either direction, but there are cases when one has a visible common enemy. Again, the prime case in my lifetime has been Pearl Harbor, Battle of Britain, the Soviet Union’s invasion of Finland, and Indonesia’s independence from the Dutch. When one has a visible common enemy that kills quickly and it’s clear that it’s the enemy of everybody, that’s something that brings people together and encourages people to cooperate.

This is also a case where leadership makes a big difference. Within the United States that’s conspicuous because we have appalling leadership at the national level, and at the state level we have a great deal of variation. We have good leadership here in California, and we’ve had dreadful leadership in Mississippi, Texas, and Florida. As things go on, my hope is that people will see that the California model is working well and that the Mississippi model and the national model are working poorly. That’s what I see as what can help create a national identity in cooperation rather than competition.

JARED DIAMOND is a professor of geography at the University of California, Los Angeles. He is the author, most recently, of Upheaval: Turning Points for Nations in Crisis. Jared Diamond’s Edge Bio Page